The structure and working principle of steam turbine generator

What is a condensing steam turbine generator?

A steam turbine generator is a kind of synchronous generator. It is an electrical device that uses a steam turbine as the prime mover to drive the rotor to rotate, and uses the principle of electromagnetic induction to convert mechanical energy into electrical energy. It is mainly used in thermal power plants or nuclear power plants.

A steam turbine generator is a power generation device that uses a steam turbine as the prime mover to drive the rotor to rotate, and uses the principle of electromagnetic induction to convert mechanical energy into electrical energy. After the DC current is passed into the rotor winding of the generator, the rotor magnetic field is established, which is called the main magnetic field, and it rotates with the rotor of the turbo-generator. 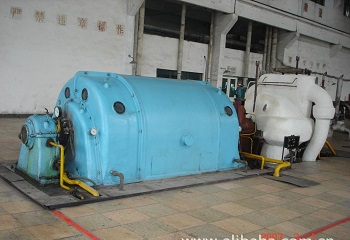 At this time, if the ends of the three-phase windings of the generator stator (that is, the neutral point) are connected to the ground, and the lead wire of the first end of the three-phase winding of the generator stator is connected to the electrical equipment, current will flow. This process It is the process of converting the mechanical energy input by the steam turbine rotor into electrical energy.

The structure of the condensing turbine

1. The stator core. The stator iron core is an important part that forms the magnetic circuit and fixes the stator winding. It is usually formed by laminating cold-rolled silicon steel sheets with a thickness of 0.5mm or 3.5mm and good magnetic conductivity. The stator iron core of the large-scale steam turbine generator is large in size, and the silicon steel sheets are punched into a fan shape, and then assembled into a circular shape with multiple pieces.

2. Stator winding. The stator windings are embedded in the stator slots of the inner circle of the stator iron core, and are arranged in three phases at an angle of 120° to each other, so as to ensure that the three-phase stator windings generate electromotive force with a phase difference of 120° from each other when the rotor rotates. Two sets of upper and lower insulated conductors (also known as wire rods) are placed in each slot, and each wire rod is divided into a straight part (placed in the iron core slot) and two terminal parts.

The straight part is the effective side of the conductor that cuts the magnetic field line and generates induced electromotive force, and the terminal part of the wire rod plays a connecting role, connecting the relevant wire rods according to a certain rule to form the three-phase winding of the stator of the generator. The stator bars of medium and small turbogenerators are all solid bars, while large turbogenerators mostly use internally cooled bars due to the need for heat dissipation, such as several solid bars and hollow bars that can pass water. composed in parallel.

3. Machine base and end cover. The function of the frame is to support and fix the stator core of the generator. The machine base is generally welded with steel plates, and must have sufficient strength and rigidity, and can meet the requirements of ventilation and heat dissipation. The function of the end cover is to cover the two ends of the generator body, and together with the frame, the stator core and the rotor, constitute a complete ventilation system inside the generator.

1. The rotor core. The generator rotor body is made of alloy steel with high strength and good magnetic conductivity. The grooves for the field windings are milled axially along the surface of the rotor body. The arrangement of the grooves is generally radial, and the part between the grooves is a tooth, commonly known as a small tooth. The unprocessed part is generally called the big tooth, and the big tooth is the pole body of the magnetic pole, which is the only way for the main magnetic flux.

5. Fan. Fans are installed at both ends of the generator rotor to speed up the circulation of gas in the stator core and rotor parts, and improve the cooling effect.

When the generator is running, various losses generated inside it will be converted into heat energy, causing the generator to heat up. Especially for large-scale steam turbine generators, because of their slender structure, the heat in the middle is not easy to dissipate, and the heat generation problem is even more serious. If the generator temperature is too high, it will directly affect the service life of the insulation, so cooling is a very important issue for large turbo generators.

The main functions of the excitation system are:

1. When the generator is in normal operation, the excitation current is supplied and automatically adjusted according to the load of the main engine to maintain a certain terminal voltage and reactive power output.

2. When the generators run in parallel, make the reactive power distribution reasonable.

4. When the generator load suddenly decreases, it can be demagnetized forcibly to prevent the voltage from rising excessively.

5. When an internal fault occurs in the generator, such as a short circuit between turns or a two-point grounding fault on the rotor, the generator can be automatically demagnetized or demagnetized.