1. The roll is the part that plastically deforms the metal.

Support the rolls and keep the rolls in a fixed position in the stand. The roller bearing has a heavy working load and changes greatly, so the bearing friction coefficient is required to be small, with sufficient strength and rigidity, and it is necessary to facilitate the replacement of the roller. Different rolling mills use different types of roll bearings. 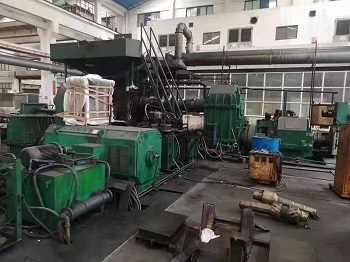 There are two types of sliding bearings: semi-dry friction and liquid friction. The semi-dry friction roller bearings are mainly bakelite, copper tile and nylon tile bearings, which are relatively cheap and are mostly used in profile rolling mills and blanking machines. There are three types of liquid friction bearings: dynamic pressure, static pressure and static-dynamic pressure. The advantage is that the friction coefficient is relatively small, the pressure bearing capacity is large, the working speed is high, and the rigidity is good. The disadvantage is that the thickness of the oil film changes with the speed. Liquid friction bearings are mostly used for back-up rolls in strip mills and other high-speed mills.

The frame consists of two "archways" to install the roll chock and the roll adjustment device, and it needs to have sufficient strength and rigidity to withstand the rolling force. There are two main types of racks: closed and open.

The closed frame is an integral frame with high strength and rigidity, and is mainly used in blooming mills and strip mills with large rolling force. The open frame is composed of two parts: the frame body and the upper cover, which is easy to change the roll, and is mainly used for the horizontal profile rolling mill. In addition, there are no archway mills.

It is used to adjust the roll gap to make the rolled piece reach the required section size. The upper roller adjustment device is also called "pressing device", and there are three kinds of manual, electric and hydraulic.

The electric pressing device includes electric motor, reducer, brake, pressing screw, pressing nut, pressing position indicator, spherical spacer and pressure gauge and other components. Its transmission efficiency is low, the rotational inertia of the moving part is large, the response speed is slow, and the adjustment accuracy is low.

Since the 1970s, after the AGC (Automatic Thickness Control) system was adopted in the strip mill, the hydraulic pressing device has been adopted in the new strip cold and hot rolling mills and heavy plate rolling mills, which has the advantages of small plate thickness deviation and high product qualification rate. .

The transmission device consists of a motor, a reducer, a gear seat and a connecting shaft. The gear base distributes the drive torque to two or more rolls.