More sieve plate towers are used for the lower tower from 15000 to 50000 grades. The diameter tower with circulating tray below 15000 grades has advantages (the liquid flow is longer than convection, but the manufacturing is complex). The convection tower below 30000 grades is used more, the large tower with four overflow streams above 30000 grades has advantages, and the packed tower has low energy consumption. However, the lower tower height should be increased by about 5m. Air separation above 50000 grade is more advantageous, especially when the upper and lower towers are arranged in parallel. 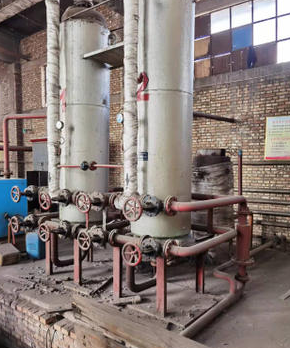 The upper tower, crude argon tower and refined argon tower are packed towers. The manufacturers are generally Sulzer or Tianda Beiyang. The cold source of the crude argon tower is generally oxygen enriched liquid air. At the same time, the waste gas can be discharged into the waste nitrogen pipeline. The energy consumption is low when the argon system is shut down; The heat source of refined argon tower is oxygen enriched liquid air or lower tower nitrogen. The cold source can be lean liquid air or liquid nitrogen. The feed can be liquid phase and gas phase. It should be noted that the sealing requirements of the condenser plate of the crude argon tower are high, otherwise the argon products will be unqualified.

(1) The upper and lower towers are arranged vertically, which is a conventional arrangement. The height is low, and it is difficult for the liquid from the lower tower to enter the upper tower or the condenser of the crude argon tower (the upstream back pressure of the whole liquid phase of the pipeline can be met, and the pipe diameter cannot be small at this time);

(2) The upper and lower towers are arranged vertically, which is a conventional arrangement with moderate height. It is difficult for the liquid from the lower tower to enter the upper tower or the condenser of the crude argon tower. A stripping pipeline is set to take the liquid to the upper tower (the pipeline outlet is required to meet ρυ ＞ 3000， ρ Is density, υ For the flow rate, the inlet position is at the height where the vaporization rate of the pipeline is 1%, at this time, the pipe diameter needs to be properly reduced, and the liquid undercooling should not be large);

(4) The upper column is arranged on the ground in sections from argon distillation, and is connected by circulating pump. The uppermost section of the crude argon column is located on the upper part of the upper column, which can reduce the space of the cold box;

(5) The upper tower is independently arranged in a cold place, connected by circulating pump, and the main cooling is at the top of the lower tower, which has the advantage that the main cooling can be done very much;

(6) The upper tower is arranged independently and connected by circulating pump. The uppermost section of the crude argon tower is located at the upper part of the upper tower. The advantage is that the main cooling can be done very much, which can also reduce the space of the cold box.