Cryogenic large-scale air separation equipment is referred to as "air separation equipment", which uses air as raw material, converts air into liquid state by means of compression cycle deep freezing, and then gradually separates it from liquid air through rectification to produce oxygen, nitrogen and Inert gases such as argon.

Air separation equipment is an important instrument and equipment used in the production and manufacturing process of the coal chemical industry and petrochemical industry. The difference in boiling point between the constituent gases in the air allows the liquefied substance to fully contact and react with the gas, and realize the separation of high-purity gases under the action of the principle of heat and mass exchange. 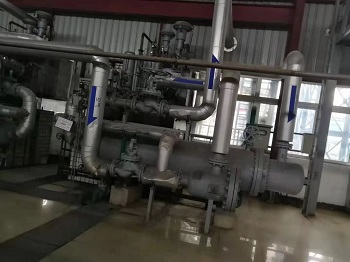 The heat balance of the air separation plant is accomplished through the refrigeration system and the heat exchange system. With the development of technology, heat exchangers mainly use aluminum plate-fin heat exchangers.

The air separation plant can produce certain products such as liquid oxygen and liquid nitrogen, and enter the liquid storage system for use when needed. It is mainly composed of storage tanks of various specifications, cryogenic liquid pumps and vaporizers.

For a long time, the main users of the air separation plant industry have been metallurgical enterprises, especially iron and steel enterprises. After 2010, the steel industry entered a period of structural adjustment, and demand slowed down. In recent years, policies have promoted the industrial integration of iron and steel enterprises, increased investment in technological transformation, eliminated outdated production capacity, improved industrial concentration and the effect of energy saving and emission reduction. Since 2014, the investment in fixed assets in my country's steel industry has continued to decrease, with an average annual decline of 9%. From 2010 to 2015, my country has eliminated a total of 240 million tons of backward steel production capacity, accounting for 20% of the crude steel production capacity in 2015.

The application of air separation equipment in the chemical industry is subdivided into coal chemical, petrochemical and fertilizer. my country's traditional coal chemical industry has entered a mature stage, and most of them are facing the pressure of overcapacity. Its main products include coke, calcium carbide, and methanol. Taking methanol as an example, the overall operating rate of methanol enterprises is mainly concentrated at 40-60%, while the new coal chemical industry represented by coal gasification and coal liquefaction is in its infancy and has a broad space for future development.

The petrochemical and chemical industry development plan points out that the nitrogen fertilizer industry should adjust the raw material and power structure, and develop low-rank coal such as bituminous coal and lignite to make fertilizers. It will also bring adjustments to the air separation plant.

In terms of petrochemicals, due to the continuous decline of oil prices in the past few years, the investment in fixed assets in the oil industry has been greatly reduced. At present, oil prices have slowly recovered, and the 2017 CAPEX announced by CNOOC has increased by about 30% compared with 2016, and the refining industry will grow. my country's ethylene production has also developed at a stable level in the past three years, and the overall demand for air separation equipment in the petrochemical industry is expected to grow steadily.